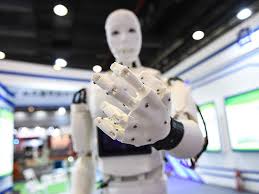 This is “The Year”

Why this title? This year I am determined to make some changes so I can get posts out faster.  This post has eight topics. Clever eh? This one is way behind due to my excursion into a hospital and rehab facility and hospital again. I hope we are done with that!

I am looking for a photo, graphic that helps tell the story about Lodestarandyou. I am not sure the graphic that I am currently using works with this subject matter.

Maybe I could use a Toddler Robot to help me get organized!

Now, engineers are ‘planning’ the flexible skills in the complex real-world situations’. In human-speak that means they are training robots to think ‘new’ again. New ways of looking at things, very much like a toddler.

In practice ‘thinking like a toddler’ would enable your new self-driving car, say a Tesla 3 running down the road. Not only is it looking for your destination, it will also be looking around so it can anticipate events.

I write posts to my blog regarding topics related to the Fourth Industrial Revolution.

How are your studies doing? Picked the field(s) of study? Signed up for the classes? On-line I assume?

This is going to be ‘ “The Year”. For years engineers and researchers have been gathering data, testing ways to enter the fastest with no errors. They have I been writing the algorithms and re-testing them so that no prejudices from the authors exist.

This is going to be the breakout year when so many products, disciplines, and new pathways open up, come together, spin around and open up even more new paths.

I recently spoke with a former coworker and he was relaying all of the improvements in the oil and gas industry. I chimed in that it was just in oil and gas. Manufacturers are putting sensors into a multitude of products going ‘out into the field’. These sensors keep the people using them informed as to its status. When was the last major repair? When is the next preventative maintenance check due?

Isn’t that magic to a paper pusher’s ears. The machines will track the metrics. Soon, in reality, the machines will know more than their handlers. They will be smarter about filing reports too!

Researchers at the University of a Queensland in Australia say the world has to produce up to 80% more food by 2050 to feed the world’s 9 billion people. They are developing ways to get that much food grown especially in a diminishing amount of space. All of this: the jobs lost, the new jobs created and trained for, the new jobs that are going to be available are going to be a major upheaval that the world has never seen before.

This flu season is going on 10 weeks. The CDC is expecting another 10 weeks. A Stay of December 30th 46 states has serious flu cases. The week before it was 36. Last year just 12 states reported widespread flu activity.

The question then arises: why is the flu so bad this year?

The flu is notorious as to its timing, locality, severity, and longevity.  All of these factors vary from year to year.

This year the strain of flu going around is strain H3N2. This is a particularly virulent strain and harder to create a vaccine for. Additionally, an issue developed in the creation of the vaccine. An abnormal mutation occurred which rendered the vaccine less effective against the virus. This aberration seemed to be 30% in the early phases of the season.

Now it is projected that the effective rate is a low as 10%! I think all bets are off as to the end of the season, the total number of people afflicted. It will be considered a “Notable” season.

Doctors advise that even if your vaccination does not reflect the most prevalent strain completely ( other strains currently circulating such as another type A and a Type B) is that your body benefits from any vaccines since it still helps you ward off the most severe symptoms and recover faster.

The good news is? Sorry  I am not aware of any specifics regarding this season. The effectiveness rate over the period 2004 to 2015 has been 33 percent for the H3N2  virus. With 61% effectiveness for the H1N1 and 54% against influenza B viruses.

Hang on almost 10 weeks to go.

THIS IS REALLY IMPORTANT!!

Have you watched the TV show “The Biggest Loser”? Remember Bob Harper? He of the ripped muscles, the chiseled physique with every muscle in the right place?  He could run faster and longer all the while talking and then turn around and run backwards without getting tangled in his shoelaces!

He had a heart attack! Last February he had a MASSIVE heart attack at a New York gym.  He was saved by a bystander that performed CPR. The paramedics got him to a hospital but he was in a coma for two days!his annual checkups indicated he was in excellent health. So what happened?

One little fatty particle in his blood called lp(a). During blood tests, we are tested for lipoproteins HDL and LDL cholesterol. Very few people are tested for lp(a). At high levels, it will triple the chances for a stroke at an early age.

Most people do not have to worry. Levels are strongly determined by genetics and the majority of people produce very little lp(a). This may be why so few people are tested for it during a routine procedure. BUT if you have parents, especially fathers die young even though they appeared in good health must be made aware of what they also may be facing.

I worked with a man whose father died young. Indeed this man barely reached age 50 when he passed on.  We must work so these tragedies will be avoided. If not we are derelict in our duties.

2 in 5 Americans carry levels that are periodically high. What’s more diet and exercise have ALMOST NO effect on l(p(a). What’s more, cholesterol-lowering drugs ONLY MODERATELY lowering it.

Lp(a) was discovered in 1963 by a Norwegian scientist Kare Berg. He noted that it was especially common in people with coronary artery disease. What lp(a) does on a regular basis is not known.

The downside of excessive lp(a) is clear: It accelerates the formation of plaque in the arteries and it promotes blood clots.

Dr. Donald Lloyd-Jones is a cardiologist at the Northwestern University Feinberg School of Medicine. He helped write the American Heart Association’s Guidelines on cholesterol says that it is a “double-whammy. Biologically it, lp(a), gets into artery wall and causes the coming damage to be accomplished more easily .”

Studies show the levels between 150 and 300 as being at high risk. So, if your levels are above 30 you need to be alert. If they are above 60? Get your butt in gear.

Many people at high risk appear similar to Bob Harper. They appear fit, health conscious, and dietary conscious. Obviously wider testing needs to be done because there are too few signs and once symptoms of heart failure are noticed it is often too late for a good outcome.

Another stress factor caused by this lipoprotein, lp(a) is the lack of effective pharmaceutical drugs. There are two drugs currently in use, niacin which is a B vitamin but is known to have some unpleasant side effects. The other is PCKSK9 inhibitors which have had modest results in lowering lp(a) levels. Additionally, if PSCH9 is used off-label it is not covered by insurance. Costs can range up to $14,000 per year.

Ionic Pharmaceutical is one company working on a new drug but it is many years before it is commercially available.

Mr. Harper now has a new mission: raise awareness of heart disease and urge people to get tested for lp(a).

If you have a father or other family member that died young of apparent heart disease especially if there were no “markers” for heart disease it is necessary for you to manage your physical health and get tested.

Bob Harper has written of his approach to his new life in “The Super Carb Diet.”

A parasite is killing America’s Veterans, 40 years after the War in Vietnam ended. Hundreds of Vietnam War veteran’s who’ve died, or are dying, of bile duct cancer which is called cholangiocarcinoma.

This cancer is rare in the United States and is caused by parasitic worms, called liver flukes, that are found in fish in the waters of Vietnam and other Southeast Asia countries.

Humans who eat raw or undercooked fish can ingest the parasite larvae, which mature in the bile ducts. These ducts or slender tubes carry digestive fluid bile and the larvae produce carcinogenic irritation.

Thousands of Americans who served in Vietnam can be at risk for this cancer.

The disease can take decades to manifest and once the cancer is discovered the overall duration of survival is less than six months.

The Department of Veterans Affairs (VA) is making it difficult for diagnosed veterans with this disease to get their benefit claims approved. Indeed most claims have been denied by the agency and this includes survivor benefit claims for the spouses.

The Associated Press reported last year that about 700 veterans with bile duct cancer have been seen by the VA in the past 15 years. Of the claims that were submitted, most were not approved because the correlation to service in Vietnam had not been established. Only 20% of claims have been approved!

The reason the VA has not been approving claims? According to their science, the lifespan of liver flukes is a maximum of twenty years. The Vietnam War ended more than forty years ago.

Dr. Paul Brindley, a professor of microbiology, immunology and tropical medicine at George Washington University, said that is beside the point. “The science suggests exposure for even some of those 20 years may have been sufficient for cancer to originate and then be dormant there for a number of decades.”

As with Agent Orange, this disease and the necessary claims approved are being thwarted by the VA. Again and again, veterans who’ve filed claims related to exposure to Agent Orange are STILL BEING DENIED.

Dr. Joshua Baker, a physician, and researcher at Duke University School of Medicine discovered an unconventional way to provide 3D scanners for $10.

He upgraded 2D ultrasound scanners with a $10 chip used in video games! He used the inexpensive chip, which normally tracks the movements of wireless controllers to give 2s scanners the ability of 3D scanners. Otherwise, a 3D scanner is about $1,000 per scan or $2,000 per MRI.

He was playing Nintendo with his son and wondered if the ultrasound probes he uses to work similarly to the digital tennis balls he was whacking around with his son.

He took the question to Duke’s Pratt School of Engineering and together they were able to produce a rounded 3D image. This game-changing discovery will help people not only in the United States that may not be able to afford a scan or MRI and especially in developing countries.